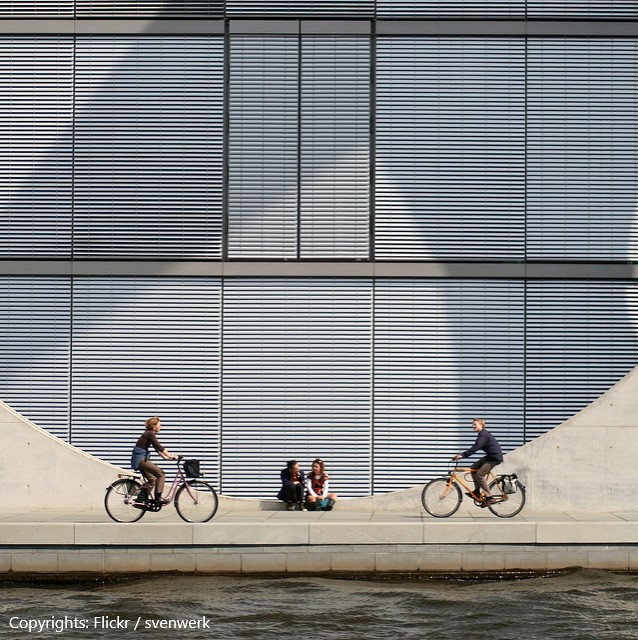 Far from being polarised, research by the Open Society European Policy Institute and dpart shows surprising nuances in people’s attitudes towards open and closed society values.

The in betweensPolitical parties have long used economic surveys to frame public attitudes in terms of Left and Right. But this Left-Right confrontation tends to overlook values, and does little to help understand the development of political opinions and choices. Germany’s political parties have begun to understand this and are now trying to engage potential voters on cultural issues.

CDU and CSU politicians are arguing for a so-called ‘Leitkultur’ (a leading culture) and the German Ministry of the Interior has been promoting the concept of ‘Heimat’ (the romantic notion of homeland).

These debates centre on the inward-looking nature of a closed society, while other parties are championing open society values. The SPD’s election manifesto advocated a ‘modern Germany open to the world’, and suggested that open society values are under threat. The party emphasised the need to ‘fight for the freedom for everyone to voice their opinion and publish it.’

After eight years of coalition governments (2005-2009 and 2013-2017) and now in another so-called ‘grand coalition’, the two parties apparently want to define their differences along open and closed society lines.

This polarisation encourages political argument and debate, but it also conveys a sense of insurmountable, perhaps irreconcilable, duality. This suggests that on the one hand there are those who care deeply about German traditions and culture, and on the other there are more globally-minded Germans who want to help refugees and ensure respect for human rights.

These political parties each shape their strategies with their different messages. They tend to assume that voters’ attitudes are at opposite ends of the scale. Yet our research raises significant doubts about the validity of this binary concept of Germans’ political and social attitudes.

Figure 1: The importance of open and closed society evaluations in Germany (scatterplot) 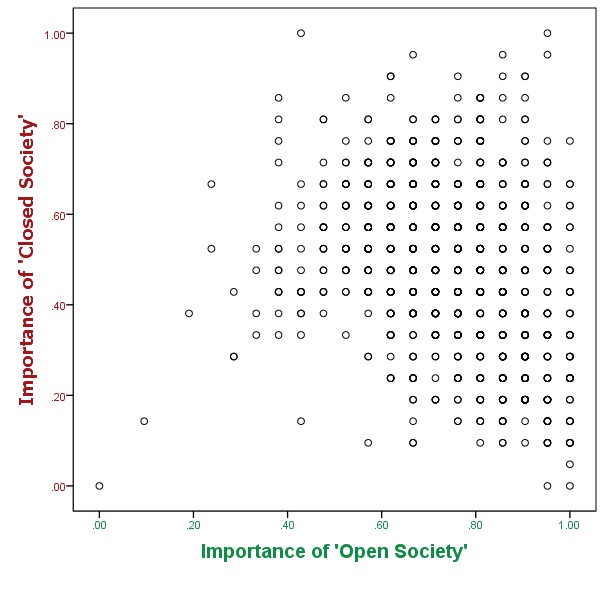 We have used data from a survey conducted in Germany in February and March 2018 to challenge this long-established approach. We asked participants to assess the importance of seven open society and seven closed society views.

We then computed the two scores to measure the overall importance that people attached to each area (methodological details are in our note about the survey). Figure 1 shows the distribution of both scores jointly, and is important in that it reveals the absence of any clear trend. While some of the people held strong closed society views and disliked the values of an open society, and vice versa, many were equally attached to both open and closed society values. The weak relationship between the two scores meant that for many people the two opinions are not at opposite ends of the spectrum. Many who gave a high rating to open society attributes similarly gave a high rating to those of a more closed society.

We then looked at concrete examples in which people were asked to choose between a specific open society attribute and a specific closed society one.

Figure 2 covers two of the 14 choices that were offered. Respondents were allowed to say whether one option was more important than the other, but they could also say that both were equally important. Many chose the latter.

When choosing between freedom of religious expression and respect of shared values, about a third selected each of the two options respectively, and another third the in-between option. These thirty-four percent of the Germans surveyed saw no problem in finding both options equally important, and the same holds true for the second example. In this, people were asked whether protecting minority rights was more important than protecting the interests of the majority. Twice as many people favoured the majority (40%), but nearly the same percentage (38%) said the two were equally important.

What this suggests is that 59 percent would either emphasise the protection of minorities or say that this protection was as important as the interests of the majority. Ignoring the in-between group and assuming a strong duality of open and closed society views adds up to a substantial distortion in our longstanding perception of German public opinion. 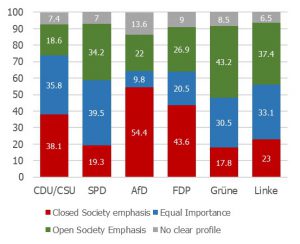 These insights are particularly important for the main political parties, as illustrated in figure 3. This shows the most commonly chosen option across all 14 sets of choices (two examples feature in figure 2). Unsurprisingly perhaps, the fewest in-betweens, or those who do not favour closed over open society values, or vice versa, are among AfD voters (10%). They are also rare among FDP voters (21%), who have the second highest level of voters emphasising closed society choices (44%), after the AfD (54%). The highest levels of open society choices are among voters for the Green Party (43%) and the leftist Die Linke (37%).

This might lead us to think that the two big parties would be right to develop binary narratives on value-based issues, as outlined earlier. But that would ignore the large group of people who gave equal importance to open and closed society choices – 36 percent of CDU/CSU voters and 40 percent of SPD voters. In the SPD’s case, it is the most common profile.

These parties in particular should consider the wants of these “in-betweens”. In the case of a large part of the population, it would be wrong to assume that those people who are concerned about “German” values – the position of the majority and the stability of the system – necessarily disapprove of protecting minority rights, or of being an open, globally-minded country.

Laying emphasis on the extremes therefore risks further alienating people from the two main parties that claim to capture broad groups of the population (as so-called ‘Volksparteien’). Addressing these “in-betweens” could help both the CDU/CSU and SPD to reach some of the voters they lost in the recent elections. In other words, they need to appreciate that for many Germans, open and closed societies are not opposites.

Dr Jan Eichhorn is the research director of d|part and oversees the work on the Voices on Values project. He also teaches Social Policy at the University of Edinburgh. 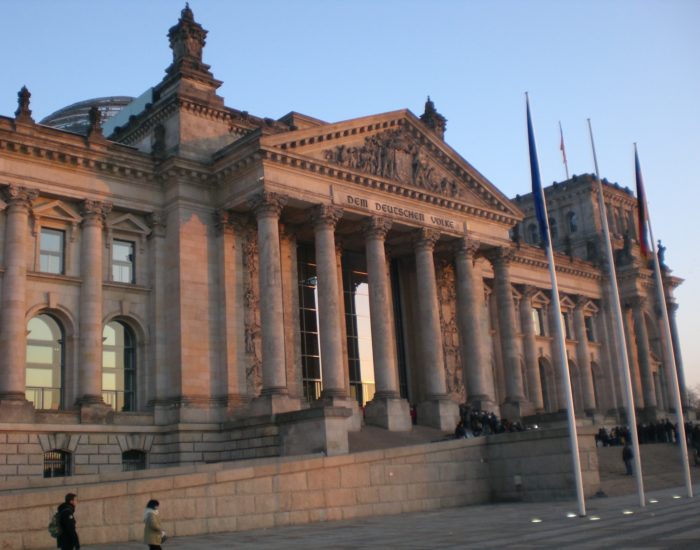 Do we have to change things, just because we are dissatisfied?