On the 31st of October we presented our new Report “Über den Osten nichts Neues?” at the Open Society Foundations Berlin.

30 years after the fall of the Berlin Wall, few issues are as hotly debated in Germany as the question whether the two formerly separate parts of Germany have fully converged, or whether “new, deep cracks” are appearing between East Germans and West Germans. 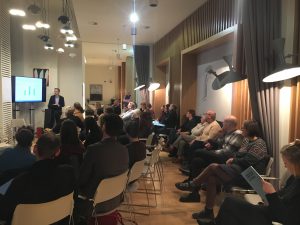 Differences do exist between people in eastern and in western Germany that shows a nation-wide representative survey carried out by d|part and the Open Society European Policy Institute (OSEPI) as part of the project ´voices on values‘. But these differences, however, are not so much signs of “new, deep cracks” between people in eastern and western Germany. The study shows that that there are at least as many different ideas of a good society among people in eastern Germany as there are in the rest of the country. There is no such thing as a typical “Ossi” (short for East German), just as well as there is no typical “Wessi” (West German).

So what is it really about different attitudes to questions of migration and the German identity of people in East and West? How much cause for concern is there and where do we stand with German unity? We discussed these questions on our event with Christian Bangel (journalist at Zeit Online) and Katrin Rohnstock (publicist and founder of Rohnstock Biographien) as well as with the audience. The moderation was led by Magali Mohr (research fellow at Futurium).